Who says Roanne, says Troisgros, the three world famous stars. The ancestral house is the leader of a gourmet and generous gastronomy. It perpetuates an attachment to flavors and products shared by the city's restaurateurs.

The culinary art of Maison Troisgros

In the history of French cuisine, there are not so many dynasties. More than others, the Troisgros family has embodied French cuisine - in all its forms, domestic and professional, bistro or restaurant, simple or learned - and its developments over almost three quarters of a century: four generations, four different eras. from the history of taste, from regionalist inspiration to New Cuisine, and from this to a practice increasingly open to the world.

Today, Michel, César and his brother Léo represent respectively the third and fourth generation at the head of the starred restaurant. They offer, without denying a certain family tradition, a completely original cuisine. At the crossroads of personal influences, especially that of native Italy, and through their many trips to the United States, Japan and Spain, this cuisine has built its own identity, particularly by playing with the entire range of acidity (acidity, sour, greenness, spiciness…), creating contrasts or overlays. Always inventive cuisine, full of humor and even impertinence, lively and tangy cuisine.

In a plate, we consider that it is necessary to avoid too many ingredients so as not to saturate the palate and harm the visual. Simplicity, purity, that which emanates from reflection and knowledge gives meaning to a kitchen. A dish that seems simple and obvious is often the result of a great story.

Above all, a family story!

91 years of service, 53 years of 3 stars for Troisgros whose cuisine has long seduced not France but the whole world. 4 generations follow one another but the prestige and the tastes remain.

The story begins in 1930 when Jean-Baptiste and Marie Troisgros take over the Hôtel des Platanes located opposite the station in Roanne. The establishment quickly becomes famous for its table and its cellar. Their two sons, Jean and Pierre, turn to cooking and learn in the best houses.

From father to son

The second generation perpetuates excellence and in 1956, Jean and Pierre Troisgros obtained their first star in the Michelin guide. In 1965, they will obtain the second star and in 1968 the third. The recognition of the house goes far beyond national borders. The two brothers initiate the movement of New French Cuisine, such as the famous salmon with sorrel.

After several years spent in important houses and abroad, Michel Troisgros and his wife Marie-Pierre returned to Roanne in 1983. They remained there following the brutal death of Jean Troisgros. In 1995, they opened Le Central, right next to the famous establishment and the following year found themselves at the head of Maison Troisgros, Pierre et Olympe, having decided to retire. The House is completely renovated. In 2008, they opened La Colline du Colombier in Iguerande, a resolutely modern space in the heart of the countryside.

The fourth generation is underway when Michel and Marie-Pierre's son, César Troisgros, joins the company after his training at the Institut Paul Bocuse and several experiences abroad. In 2014, a new family project was launched ...

A move to the countryside

4 years ago, the Troisgros House moved to the countryside. The new house consists of a farmhouse, a beautiful mansion and a contemporary restaurant "Le Bois sans Feuilles". The dining room slips under a magnificent hundred-year-old oak, it offers a magnificent view of unspoiled nature. The 17 hectare estate is made up of woods, a pond, pastures and an inspiring permaculture garden.

The hotel offers 15 spacious rooms, each designed with elegance and delicacy, in the spirit of a private home. They were designed by Marie-Pierre. They are bathed in lights and overlook the tall trees.

On the ground floor, a row of lounges opens onto a large terrace. The contemporary art collection of Michel and Marie-Pierre gives them character.

In confidence, and for a long time. It is a priority for Maison Troisgros. The resources are selected with the greatest care, paying attention to the care of the culture and the nature of the soils, respecting the cycle of the seasons.
They work hand in hand with them to enhance their work. The raw material must be irreproachable to constitute a magnificent dish. Complicit elements such as acidity, bitterness, smoothness, smoothness, softness, crunchiness, temperatures, beauty express our style.

In 1995, Michel Troisgros and his wife Marie-Pierre opened a “café-restaurant-grocery store”. The memory of the Italian “salumerie” inspired them in the design of this simple and elegant brasserie where precise, household-inspired cuisine is served like the onion tart with dried porcini mushrooms, the fourme puffed omelet, the famous chocolate dariole. Travel souvenirs also slip into the menu: fish & chips, Indian sauce, sea bream ceviche or ginger frogs. Also on offer are high-quality take-out ingredients such as judion, a huge white bean found in Seville's tapas bars and a choice ingredient for rabbit livers with artichoke. Thereby, the Central has become one of the favorite meeting places for a good number of Roannais.

The Colline du Colombier in Iguerande in Saône-et-Loire

For Michel and Marie-Pierre Troisgros, the history of the Colline du Colombier is made up of landscapes and encounters. The emotion they felt when they discovered, between hills and valleys, facing the Brionnais hills, these old semi-disused agricultural buildings, they knew how to keep it alive and communicate it. With the help of all of them, they gave it a shape that is a response to this landscape and imagined the type of hospitality that suits this bucolic simplicity. One dish on the menu bears this name, Bucolic Salad, evoking a lost feeling. The cuisine is based on familiar products and country habits, such as the soup that awaits you on the table, in a gesture of comfort.

I have never had the privilege of tasting the dishes of the famous Michel Troisgros. On the other hand, I have already met the starred chef in the professional context. I remember an enthusiast with a mad desire to transmit. Michel Troisgros told us about his cuisine in all simplicity and especially his vegetable garden cultivated in permaculture. He was proud of his products. He even left himself to a few confidences.
For a romantic meal or to celebrate a great occasion, let yourself be tempted by a lunch or a dinner in Ouches in the heart of a haven of peace! Stars will be in your eyes and on your taste buds. 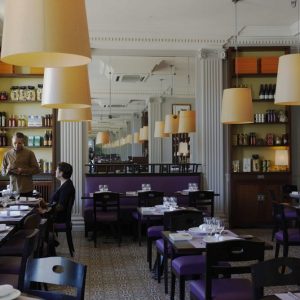 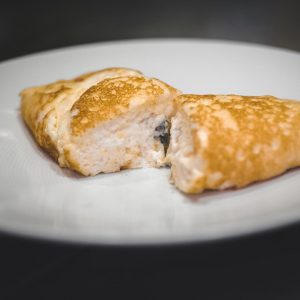 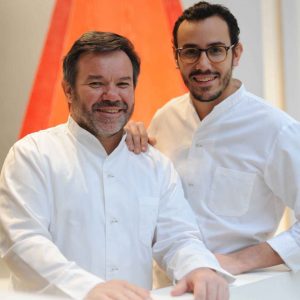 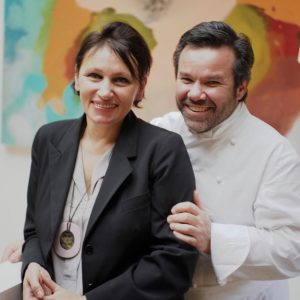 Maison Troisgros, the art of hosting at the top

Top of the page 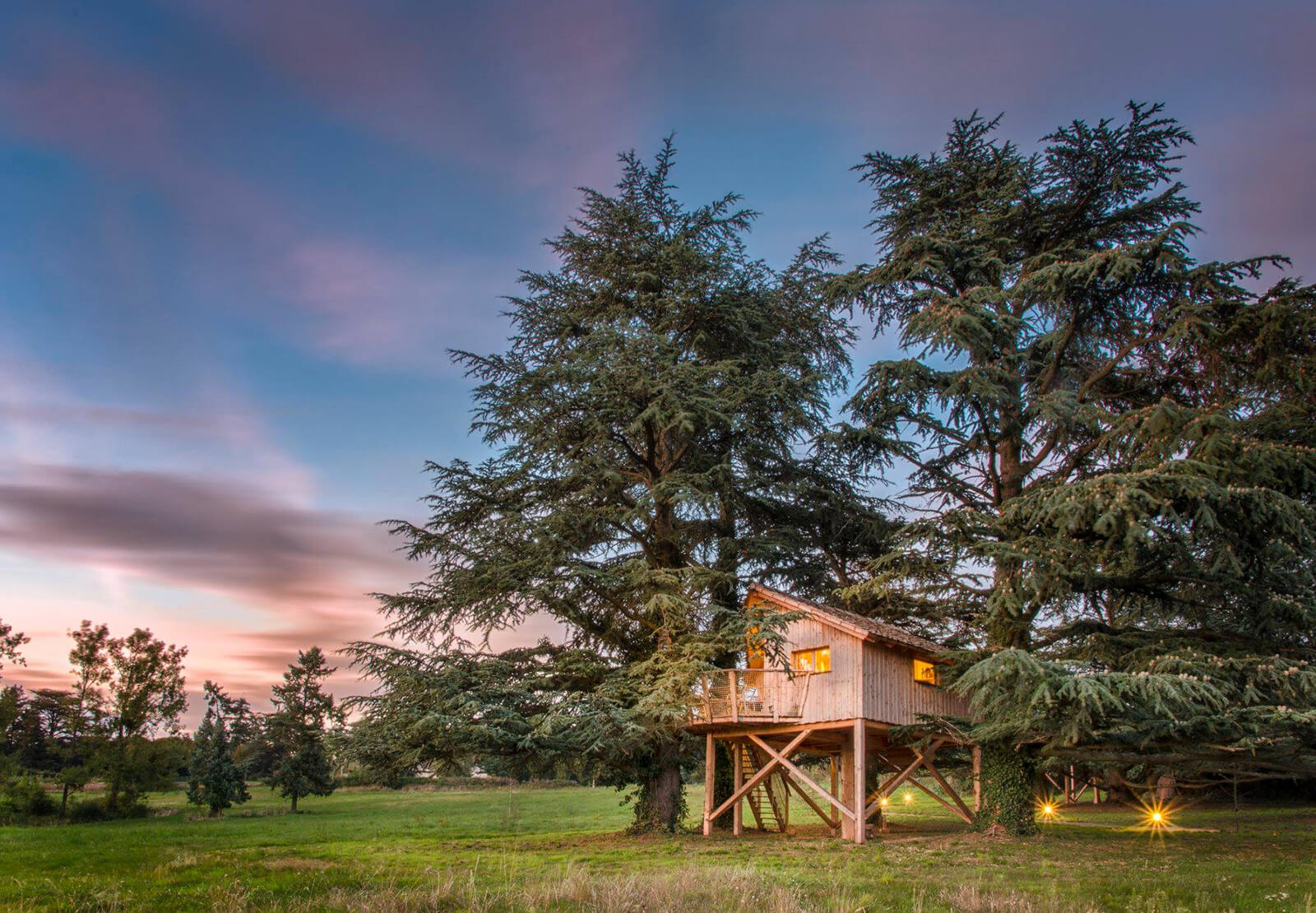